What is the Hard Drive Actuator Assembly?

Whether you’re dealing with a hard drive failure or you’re simply interested in data storage engineering, you’ve likely come across the term “actuator,” “actuator assembly,” or “read/write head assembly.” These terms describe one of the most crucial components of modern hard disk drives (HDDs) — and one of the components most prone to failure.

In this article, we’ll provide an overview of how hard drive actuators function and identify a few possible ways to diagnose an actuator failure. Before we dive into the details, an important note: Replacing a failed HDD actuator is a technically complex project that requires specialized equipment and access to a certified cleanroom.

If you need to recover files from a non-functioning hard drive, contact the experts at Datarecovery.com as soon as possible. Call 1-800-237-4200 or fill out our online case form to get started.

Hard drives read and write data from platters, which are disks coated in a thin layer of magnetic material. The platters spin at fast speeds (typically 7,200 or 5,400 rotations per minute for modern desktop drives). A set of heads (also called read/write heads, or actuator heads) accesses the magnetic charges, which the computer recognizes as data.

Actuators are incredibly accurate, and they’ve become more accurate as storage technology has evolved. On modern hard drives, micro-actuators on the assembly help to ensure that the heads are perfectly positioned to find data anywhere on the disks. This improves head accuracy — or tracking — which in turn allows manufacturers to improve data density, allowing for higher HDD capacities and faster seek times. 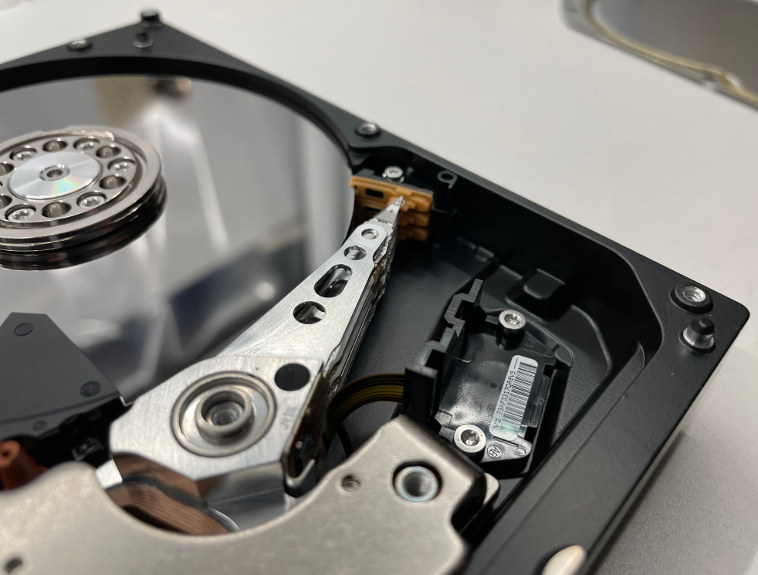 Some of the most common symptoms of HDD actuator assembly failures include:

However, these symptoms can apply to other hard drive failure scenarios. For example, if a drive’s electronics board fails, the heads may become misaligned, which can cause data corruption and unusual noises. Actuators can also fail in a variety of ways — the motor that moves the actuator might seize, the actuator arms could break, or the microactuators may stop tracking properly.

Data recovery engineers need to physically evaluate hard drives to determine the extent of the failure. Depending on the results of the evaluation, engineers may need to replace the actuator assembly, replace individual read/write heads, replace the electronics board, or use other methods to restore access to the user’s files.

If you’re reading this article because your hard drive isn’t functioning as expected, here’s an important takeaway: All hard drive issues can become more severe over time. We recommend immediately disconnecting your hard drive when it shows signs of physical damage or data loss — do not attempt to repair your drive at home. By disconnecting the hard drive as soon as symptoms occur, you can limit data loss (and in the process, you’ll significantly reduce the costs of data recovery).

As world leaders in hard drive data recovery, we offer free evaluations for all hard drives, regardless of brand or failure scenario. We also provide a no data, no charge guarantee: If our engineers are unable to recover your files, you won’t pay for the recovery attempt or return shipping. For more information, chat with us, submit a case online, or call our team at 1-800-237-4200.