What Is A Hard Drive Controller?

A hard drive’s controller is an important component that allows the device to transfer data to and from the computer’s central processing unit (CPU). The controller is a component of the printed circuit board (PCB), and sometimes the terms PCB and hard drive controller are used interchangeably. 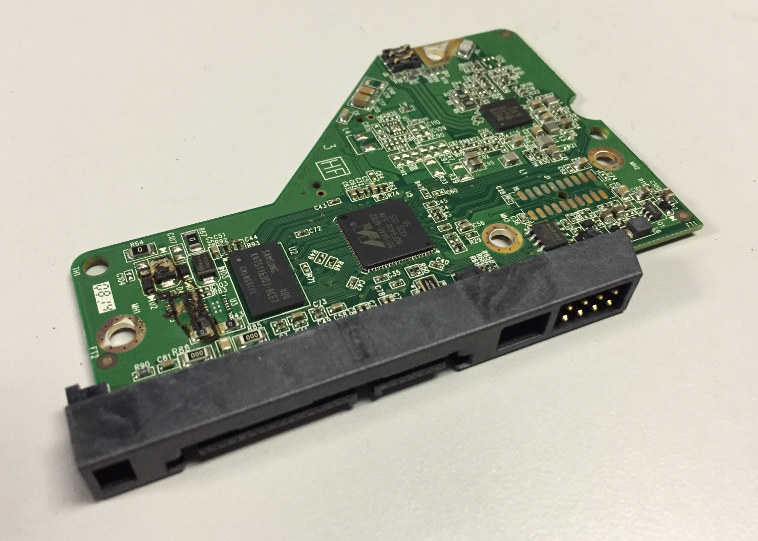 To understand the importance of the hard drive controller, it’s helpful to understand a few of the other main components of an HDD:

The hard drive controller’s primary purpose is to send data back and forth from the computer, but it’s also responsible for providing power to the actuator assembly and the motor that moves the platters.

Below, we’ll discuss some of the common problems that affect hard drive controllers and what you can do (and what you shouldn’t do) to address them. If your hard drive has failed, Datarecovery.com can help. Submit a case online to schedule a free evaluation or read on for more information.

A failed hard drive controller can cause different symptoms depending on the source of the failure.

Like all electronic devices, a controller board can fail due to power supply issues, poor operating conditions, manufacturing defects, or for various other reasons. Most hard drives have a warranty period of 3-5 years; while many hard drives operate reliably for far longer, every hard drive (and every other type of storage device) eventually fails.

Some of the most common symptoms associated with HDD controller failure include:

Failure symptoms vary depending on the source of the damage. For instance, if the controller is unable to interface with the CPU, the hard drive may appear to operate normally — no unusual sounds or other noticeable symptoms. However, if the hard drive’s motor controller chip fails, the drive may not boot, or it may make a single click sound when attempting to boot.

If your hard drive displays any symptoms of a physical failure, we strongly recommend disconnecting the power source. Operating a failed hard drive can cause permanent data loss — and changing the operating conditions (for instance, hooking the hard drive up to another computer) will not resolve a controller issue.

Hard drive controllers aren’t interchangeable — and replacing them can cause data loss.

Many computer users assume that controller boards are identical within a certain model number or firmware revision number. Unfortunately, this is rarely the case; modern hard drives often have drive-specific firmware, configured during the manufacturing process to allow the drive to operate as reliably and efficiently as possible.

In other words, you should never try to swap out a failed hard drive’s PCB with another PCB. Even if you’re able to find a controller with the same firmware revision number — which can be difficult, even for professional data recovery companies — some components of the firmware may need to be rewritten to restore the drive to an operating condition.

By swapping out a hard drive’s PCB, you risk several serious consequences:

These issues can cause permanent data loss. The safest course of action is to disconnect the power source and contact a professional data recovery company.

Datarecovery.com operates several laboratories in the United States and Canada. All of our facilities are real laboratories, and all work is performed on location — and with ISO-certified Class 5 cleanrooms, proprietary firmware repair equipment, and experienced engineers, we offer industry-leading resources for restoring files from hard drives, solid-state drives, RAID arrays, and other devices.

We offer a “no data, no charge” policy for all hard drive services. If our team is unable to recover your files, you don’t pay — not even for shipping. To schedule a free evaluation, call us today at 1-800-237-4200 or submit a case online.