The Unique Way Datarecovery.com, Inc. Can Recover Data from MacBook Model A1708 SSDs

When choosing a new computer, the amount of storage on the laptop or desktop is often a huge deciding factor. Some don’t need much, seeing as they’ll just be using the computer for casual browsing, streaming, and the occasional work task. Others need quite a bit, whether it be for storing videos, downloading computer games, digitizing massive photo collections, or some other activity that requires hundreds — or even thousands — of gigabytes. While storage is clearly important and often on the forefront of the buyer’s mind, there’s not always much thought that goes into how the computer stores data. It all comes down to two options: HDD or SSD.

What Is an SSD?

An SSD is a solid state drive, which basically means that it has no physical moving parts. This differs significantly from an HDD (or hard disk drive) which uses an arm with several heads, also known as transducers, to read and write data on a spinning disc — almost like an incredibly tiny record player with a vinyl record and a needle.

The Trouble with SSDs

While SSDs are much faster than HDDs — 10 to 20 times, at least — and much more compact, making for a lighter, quicker computer, they do come with their fair share of troubles. For starters, they’re a lot more expensive than your traditional HDDs. This has a lot to do with the fact that they’re newer technology, but you also have to factor in the difference in storage capacity: a single HDD can store more than a single SSD, so computers equipped with SSDs will need more drives to meet the demands of those in need of a lot of storage.

Beyond this, there’s the issue of reliability: HDDs are more susceptible to malfunctions because of the physical moving parts at play, but SSDs are more vulnerable to total memory loss, bad sectors, and all-out corruption. When this happens, it’s no easy fix — especially when HDDs are more easily recoverable because they’re physically reading and writing on a disc, while SSDs are not. They can be a real headache to recover data from, even for the most seasoned computer experts. Thankfully for those using a MacBook purchased in the last several years, Datarecovery.com has recently developed a proprietary way to recover data from SSD Model A1708.

Which MacBooks Come with This Drive? 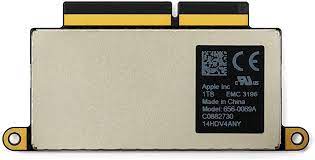 MacBook SSD Model A1708 is unique to only a handful of Apple computers: the MacBook Pro 13 from late 2016 (MLL42LL/A, either 2.0 GHz Core i5 or 2.4 GHz Core i7) and the MacBook Pro 14 from mid 2017 (MPXQ2LL/A, either 2.3 GHz Core i5 or 2.5 GHz Core i7). If you’re unsure which model your MacBook is, you can go to the “About This Mac” tab on your MacBook’s menu in the upper lefthand corner of the screen. If your MacBook cannot or will not start up, you’ll need to locate the serial number on the underside of the MacBook or on the device’s original packaging near the barcode. From there, head to Apple’s website, go to the Check Coverage page, and enter the number in the designated bar.

This generation of late 2016/mid 2017 MacBook Pros is extremely tricky for amateur repairs, because only the models without Touch Bars have a removable SSD. For this reason, we do not recommend attempting fixing the SSD yourself. Turn to Datarecovery.com instead.

Recovering data from an SSD is not an easy task, especially with MacBooks — they’re manufactured in such a way that isn’t exactly user-friendly, which is why Datarecovery.com strongly suggests sending in your damaged or corrupted SSD before you try and make the repairs yourself. SSD recovery demands special tools and methods that allow Datarecovery.com engineers to read the information from the drive and create a safe copy of any recoverable files from the device.

Typically, SSD recovery is considered either a Level 1 or a Level 2. Level 1 recovery happens when there’s minimal damage to the SSD or the firmware of the drive, while a Level 2 recovery happens when there’s extensive physical or electrical damage that requires the drive’s memory chips to be extracted and worked on through a very difficult and complicated process of algorithms and repairs.

No matter the issue with your MacBook SSD Model A1708, the highly trained engineers at Datarecovery.com have the innovative methods to attempt a recovery of data after any type of failure.

If your MacBook Pro is plagued with a damaged or defective SSD Model A1708, contact Datarecovery.com today for a free quote. This preliminary analysis comes at no cost to you and will help our team of engineers diagnose the problem you’re facing. Reach out today to learn more.