The Rapid Growth of Storage Technologies: How Data Capacities Changed (And How They’ll Keep Changing)

The history of data storage technology is truly awe inspiring. Over the course of a few decades, innovative technologies have allowed for unbelievable advances in computing, and today, we’re continuing to see incredible improvements in the tools we use to store our data.

Consider where we started: In 1956, IBM’s RAMAC 350 hard drive revolutionized computing by providing an astounding five megabytes of storage space. The first product of its kind, it cost about $5,000 (unadjusted for inflation) and stored data on 50 24-inch platters. It weighed about a ton, so its applications were limited, to say the least.

Today, the RAMAC 350’s incredible power seems downright laughable. The recently announced Nimbus Data ExaDrive DC100 can store 100 terabytes of data on a standard 3.5-inch form factor; to store that much data on RAMAC 350 hard drives, you’d need quite a bit of physical space—in fact, by our calculations, you’d need 20,971,520 RAMAC 350s, and in 1950 dollars, that would mean an investment of over $104 billion. And good luck finding the floor space for your new RAMAC 350 collection. We’d recommend keeping them on the ground floor.But as storage capacities have improved, the challenges have also grown exponentially. Are we nearing a point where storage capacities will stop growing? The short answer: No. But continued expansion will require us to rethink many of our tried-and-true assumptions about storage media. For nerds like us, these are exciting times.

How Current Data Storage Technologies Are Pushing the Bar

While we haven’t handled one in our laboratory, Nimbus claims that their 100-terabyte flash drive uses 3D NAND technology to allow for its incredible capacity. 3D NAND technology is likely a way forward for data storage, but to understand why, we need to look at the basics of how NAND flash storage works.

Typical NAND technologies arrange memory cells side by side; more cells equate to a higher capacity for the drive. To make a NAND drive larger, you’d need to reduce the size of the cells, but due to Moore’s law, there’s a limit to how small the cells can get. Smaller cells are also more prone to memory leak—we won’t get into that here, but the takeaway is that smaller cells are generally less dependable.
So, how do you store more data in the same amount of physical space without shrinking the cells? Simple (even if it’s not really simple): You stack them. Intel’s 3D NAND technology, as its name implies, allows the memory cells to be stacked on top of one another. This has the obvious advantage of expanding the number of memory cells on each block of  semiconducting material—called a die—without reducing the NAND drive’s dependability.

There are, of course, some problems with this extremely complex technology. Currently, 3D NAND is expensive to produce, since the layers of cells need to be perfectly aligned in series in order to work properly. Still, it’s potentially a world-changing technology, and the first consumer devices using 3D NAND are already on the market. 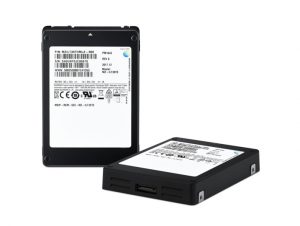 Currently, we store data on transistors as small as 14 nanometers across. As QZ reports, that’s just 14 times wider than the molecules of our DNA. Eventually, transistors won’t be able to shrink any further, and at that point, in order to improve storage capacities, we’ll have to move to a different type of technology.

What might that look like? Look in a mirror—you might be the key (or, rather, your DNA might be the key; we suppose you’d need a pretty incredible mirror to see individual strands of genetic material, but the point stands). In 2012, Harvard scientists crammed an incredible 700 terabytes of data onto a single gram of DNA.  As Extreme Tech reports:

To read the data stored in DNA, you simply sequence it — just as if you were sequencing the human genome — and convert each of the TGAC bases back into binary. To aid with sequencing, each strand of DNA has a 19-bit address block at the start (the red bits in the image below) — so a whole vat of DNA can be sequenced out of order, and then sorted into usable data using the addresses. [Source]

This is more of a proof of concept than a usable technology. To use DNA storage—or organic storage, depending on whether you appreciate the use of Whole Foods terminology in your science reporting—we’ll need to become very good at reading and writing the data quickly. That’s an enormous challenge, but future technologies could make it a viable alternative to our current tech.

Is Quantum Data Storage Close to a Reality?

Another option for improving storage: quantum computing. In early 2017, engineers at the University of New South Wales in Australia successfully stored and retrieved quantum data from the nucleus of a solitary atom of phosphorus.

The researchers’ computer utilized two quantum bits and a single orbiting electron to store information. The quantum bits—called qubits for short—are capable of registering both a one and a zero at the same time, as opposed to the binary nature of…well, binary technologies like NAND and magnetic hard-disk drives. Superpositioned qubits could allow us to store incredible amounts of data in a microscopic amount of space.

Again, the research is more of a proof of concept. Programming the computer required incredibly cold temperatures and powerful magnetic fields, per Seeker, so you won’t find quantum drives lining the shelves of your local Best Buy anytime soon (unless you buy products from the storage brand Quantum, of course).

But every world-changing technology starts with a proof of concept. In the near future, we’ll probably be forced to give up technologies like NAND in order to keep pushing storage further—but when that time comes, we’ll have options.