James Howells, who lost 8,000 bitcoins when he accidentally threw away his hard drive in 2013, wants to use two robotic dogs to find his data.

If you’ve ever doubted that we’re living in the future, go back and read that first sentence again.

Howells mined the bitcoins in 2009, but four years later, he messed up: He had intended to throw out a blank hard drive, but somehow threw out the mining HDD — and thousands of bitcoin, which are valued at around $191.36 million at the time of publication (note that the price of Bitcoin can change dramatically, as many investors have discovered over the last few months).

In an interview with Business Insider, Howells, who formerly worked in information technology (IT), announced a plan to correct his mistake.

Since 2013, he has petitioned the city council of Newport, Wales to allow him to dig through the local landfill to find the drive. Those requests have been denied; the city believes that Howells’ process would be environmentally destructive and expensive for taxpayers.

Related: What Info Do You Need to Access a Lost Bitcoin Wallet?

A Three-Year Plan to Recover Millions in Lost Crypto 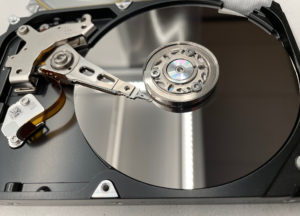 But Howells hasn’t given up (and honestly, we can’t blame him). He has raised $11 million through venture capital funding, which he intends to use for a three-year recovery project (once he’s able to convince the city council to approve his strategy).

For this extraordinarily unconventional data recovery job, Howells intends to use a technical approach:

The cameras — and the robot dogs — are intended to discourage treasure seekers from joining Howells on his quest to recover his data.

What are the chances of data recovery on a 10-year-old hard drive?

At Datarecovery.com, we’ve never encountered a situation quite like Howells’. That’s saying something: Each year, we handle thousands of cases from all over the world, and our engineers are rarely surprised.

But while we haven’t received any hard drives that have rested in a landfill for nearly a decade, we have received HDDs that have been neglected for a similar amount of time. As long as there isn’t significant damage to the hard drive’s platters — discs coated in magnetic material that stores data — the chances of recovery should be high.

The Business Insider report lists an approximate data recovery success percentage of 80-90%. We wouldn’t necessarily agree with those numbers; there’s a decent chance that the drive’s electronics are badly corroded, and depending on the landfill’s processes, the platter material composition, and numerous other factors, data recovery may be unlikely at this point.

With that said, we’re certainly rooting for Howells. He says he will only keep 30% of the recovered bitcoin (an estimated $57.4 million USD). The rest will go to investors, Newport residents, and local charitable causes.

While we’ve successfully recovered large amounts of bitcoin and other cryptocurrencies for hundreds of clients, we’ve never seen a case quite like this one.

If you’ve lost data — or cryptocurrency — we’re here to help. Call Datarecovery.com at 1-800-237-4200 or submit a case online to connect with our engineers.