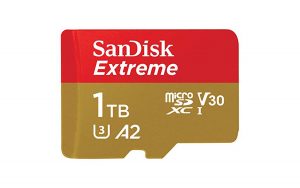 SanDisk offers a limited lifetime warranty in most countries and notes that their card is “temperature proof, water proof, shock proof, and x-ray proof.”

Currently, the card is available on SanDisk’s website for $449.99. Some third-party sites are selling it at slightly higher rates, and the large price tag will probably scare off average consumers; however, the card could be extremely useful for photographers and videographers, as microSDHC offers a number of advantages over hard drives and other traditional storage media. The fast read/write speeds are especially notable for professional applications.

With that said, we believe it’s important to point out that larger microSD cards are not inherently better at resisting data loss than smaller cards. In fact, as form factors shrink, issues like data corruption often become more of an issue.

We haven’t had a chance to test the terabyte version of this SanDisk microSD card in our laboratories, but we’re ordering one now, and we commend SanDisk for the achievement. As larger cards hit the market, solid-state memory becomes more affordable for the average computer user, and this is certainly an exciting landmark.

Still, if you’re planning on purchasing a SanDisk 1TB card (or any other large microSD device), keep these tips in mind:

And as we always note, if you lose data from a microSD card, don’t panic. Stop trying to access the device and contact a qualified data recovery company as soon as possible. Most lost data is recoverable, and our facilities are equipped with state-of-the-art technology that allows for the best possible chances of recovery in any scenario. To learn more, call us at 1-800-237-4200 and ask to speak with a microSD data recovery specialist.