Does Defragmenting A Solid-State Drive Cause Data Loss? 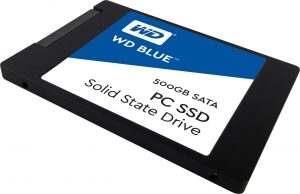 If you’re looking for a fast answer, though, here it is: Don’t manually defragment your SSD, but don’t worry about whether your operating system’s standard defragmentation processes will break your device.

What Defragmentation Does For Hard Drives

We’ll assume that you know the basics of hard drive functionality: Read/write heads move over magnetically charged platters, storing data as 1’s and 0’s (there’s more to it than that, of course, but you can check out this blog for a more detailed overview).

When a hard drive writes data, it uses any available space. It consults the file tables to determine what space is available, then starts writing; the hard drive’s goal is to save the data as quickly and efficiently as possible.

If a hard drive has been in use for a significant amount of time, it won’t contain much empty space, and the read/write heads probably won’t put the pieces of the file right next to each other. The data is not contiguous — it’s not all in the same physical spot — and so, it’s fragmented.

Defragmentation moves the pieces of the file next to each other. When the file is less fragmented, the hard drive’s read/write heads don’t have to move as much to access the data. This can improve the hard drive’s efficiency.

Here, we should note that defragmentation is a disk-intensive process. If your hard drive is showing any signs of physical failure — large amounts of data corruption, unusual sounds, and the like — don’t defrag it. Turn it off immediately and contact a data recovery company, or if you’ve got a backup, replace it as soon as possible. 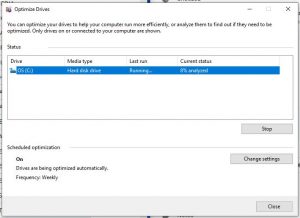 A defragmentation tool in Windows 10.

As the name implies, a solid-state drive has no moving components. There’s no read/write head assembly, so file fragmentation is pretty much a non-issue. The SSD has a tiny seek time, and so defragmentation doesn’t help to improve performance.

SSDs store data as electrical charges, rather than as magnetic charges, and because of the way that they process their data, they often purposely segment data. Defragmenting the solid-state drive will not improve performance, but it will wear out the electrical components that store the data.

With all of that said, an SSD can get too fragmented at a certain point. At maximum file fragmentation, you’ll get errors when you try to write or update files, and the SSD may slow down as a result. Windows 10 and Mac OS X perform optimization in the background to prevent this, so most users will never notice this issue.

The takeaway: Defragmenting a solid-state drive probably won’t cause immediate data loss, but by definition, any SSD write process makes the device less reliable. That’s why manual defragmentation makes no sense on solid-state media — if anything, it harms the media and limits its lifespan.

That’s not to say that you can’t optimize your SSD. Modern SSDs use the TRIM command, which allows the operating system to tell the SSD when blocks of data are no longer needed. If you’re noticing less-than-perfect performance from your SSD, make sure you’ve got the TRIM command enabled (most modern operating systems will enable TRIM by default).

If your solid-state drive has failed or if you encounter any read/write issues, contact Datarecovery.com at 1-800-237-4200 to discuss options. Otherwise, don’t worry about SSD defragmentation — and don’t go out of your way to defrag a perfectly operational solid-state drive.