Cybercriminals are embracing alternative cryptocurrencies due to a multitude of concerns over bitcoin. Bitcoin’s newfound popularity has led to booming and busting prices, higher transaction fees, and longer wait times to confirm transactions. Harder-to-trace and cheaper-to-use digital currencies such as monero have subsequently seen an increase in popularity. 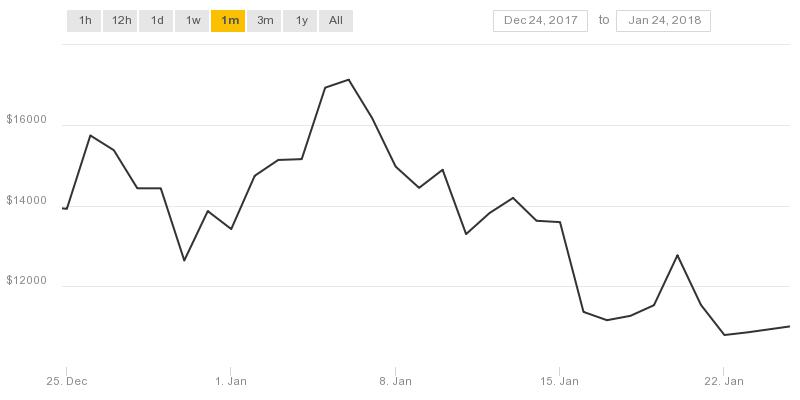 The price of bitcoin has fluctuated wildly, spooking investors and frustrating cybercriminals.

And a fluctuating price isn’t the cryptocurrency’s only problem. Gabriel Glusman, senior cyber intelligence analyst at Sixgill, told ZDNet, “the time it takes for transactions to confirm, the high volume, and the transaction fees makes it that anything that’s less than $200 isn’t worth paying in bitcoin.” These problems have spurred hackers to look for alternate forms of payment.

The takedown of dark websites AlphaBay and Hansa has cybercriminals worried about cryptocurrency anonymity.

A joint effort by the U.S. Department of Justice and Europol took down AlphaBay, a website that hosted listings for illegal drugs, stolen and fraudulent documents, firearms, and other illicit products. Once the site was shuttered, criminals flocked to another dark website, Hansa.

Unfortunately for the criminals who created Hansa accounts, the site had already been seized by Dutch officials. International law enforcement agencies silently recorded the criminal activity taking place on Hansa. “They flocked to Hansa in their droves,” Interpol director Rob Wainwright told Wired. “We recorded an eight-times increase in the number of new users on Hansa immediately following the takedown of AlphaBay.”

The closures of AlphaBay and Hansa have spooked some cybercriminals into seeking currencies with more privacy protections than bitcoin. Wainwright tweeted a warning that, “We’ll see a progressive shift in 2018 towards criminal use of cryptocurrencies other than Bitcoin, making it generally more challenging for law enforcement to counter.”

Monero has a growing share of the cryptocurrency market.

The alt-coin launched in 2014 and focuses on being untraceable, which has made it popular for ransomware distributors. Matt Suiche, founder of Comae Technologies told Bloomberg that monero is now “one of the favorites, if not the favorite” cryptocurrency of ransomware attackers.

Monero transaction fees (like those of bitcoin) are not fixed, but they have been significantly lower than bitcoin’s on average. Monero also has many more features to ensure anonymity than bitcoin (though some transactions from between 2014 and 2016 may be traceable).

While monero’s developers aren’t advocating for criminals to use it, they admit that it is well-suited for illegal transactions. Riccardo Spagni, a core developer for the alt-coin told Bloomberg, “I imagine that monero provides massive advantages for criminals over bitcoin, so they would use [it].”

Another attractive currency for use on the dark web is Dash.

The alt-coin, whose name is a portmanteau of “digital cash,” may have an even brighter future than monero. It has extremely low transaction fees (they aren’t fixed, but are generally less than $1) and an InstantSend function that completes transactions in as little as a few seconds. Dash also has a feature called PrivateSend that makes it attractive to those looking to do untraceable deals.

Dash received media attention after inking a deal with Kuvacash, a project aiming to stabilize Zimbabwe’s runaway inflation. The $550,000 partnership led to a steady increase in the coin’s price until an abrupt nosedive with most other cryptocurrencies in mid-January. Still, if the coin achieves mainstream popularity, it will be very attractive to cybercriminals looking for a good blend of ease-of-use and increased privacy.

Ransomware may embrace new currencies, but it’s not going away any time soon.

Hancock Health and Allscripts, an electronic health record company, have both suffered costly ransomware attacks in January 2018. Last year saw ransomware cripple dozens of organizations and businesses as IT departments scrambled to keep up. That is to say, bitcoin’s price may fluctuate, but ransomware attacks remain a constant.

Cybercriminals fleeing the bitcoin market does not necessarily mean that law-abiding consumers will, too. However, some of bitcoin’s issues, like hefty transaction fees and long confirmation times, extend to everyone who uses it. Other cryptocurrencies like monero and Zcash hope to capture a larger market share due to enhanced privacy features.

Whichever form wins out in the end, there is a demonstrated appetite for cryptocurrency — the current market cap stands at over $500 billion. Our only advice is that if you decide to invest in one of these new alt-coins, don’t choose SpriteCoin — it’s a disguised ransomware that will encrypt your files and demand 0.3 monero.