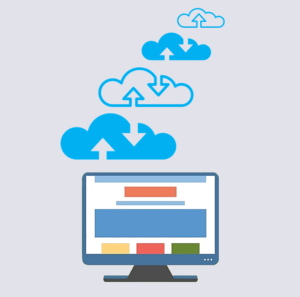 Odds are, we’ve all had one of those pesky backup reminders pop up on our phones, our tablets, and our laptops at one point or another. Whether you dismiss them immediately or actually take the time to back up your device, you’re familiar with the concept: Backups make a copy of the important information stored on your tech and save that information — whether to a hard drive or to the cloud — in case something happens to your device and you need to restore what was lost.

Backups are regarded as one of the only ways to truly protect your devices and your information, but this raises the question: What if something happens to the backup? Then what? A cloud-to-cloud backup is one possible answer.

What Exactly Is the Cloud?

To explain how cloud-to-cloud backups work, it’s necessary to have a firm grasp on what the cloud actually is. Now, of course, you likely know by now that the cloud is a way to store information — it’s not as novel a concept as it once was when it first began to gain widespread popularity with the advent of Dropbox and iCloud in the late 2000s and early 2010s, respectively. But where exactly is the cloud?

While your information isn’t stored on your device with cloud storage, it has to be stored somewhere. Typically this is in logical pools, a phrase that means a collection of various physical volumes that span multiple servers and even multiple locations owned by the hosting company. Whether it be Apple, Amazon, Google, Dropbox, or some other host entirely, these cloud storage companies are the ones dedicated to keeping your data readily available and easily accessible while also freeing up space on your device.

How Does Cloud-to-Cloud Backup Work?

Jumping off of this definition, a cloud-to-cloud backup is the process of backing up your cloud backup. Think of it like the reserve parachute to your main parachute, or the airbag to your seatbelt: it’s an extra precaution that is not a bad idea to take when dealing with your important personal data. All it takes to initiate a cloud-to-cloud backup is simply saving the information stored on one cloud storage host onto another for additional safekeeping.

The backup created during a cloud-to-cloud backup is essentially the third copy of the information: the first being the original, primary copy, the second being the initial backup, and the third being that backup of the backup. While it might seem redundant to some, cloud-to-cloud backups are popular for several reasons. For one, it provides some extra peace of mind that your information will be safe even if something happens to your backup. It also eliminates the need to invest in physical storage hardware by backing up your cloud backup to another cloud backup. They’re also popular for the simple fact that there are plenty of hosts to choose from and they’re all accessible to anyone with an internet connection, making them remarkably convenient.

Cloud-to-Cloud Backup Compared to Other Backups

While these reasons are certainly valid, it’s worth taking a look at how cloud-to-cloud backups stack up against other forms of backups (namely physical hard drives).

Physical forms of backups like external hard drives have the upper hand over cloud-to-cloud in a couple major ways: Because they don’t require an internet connection in order to work, these hard drives are much safer from any unwanted snooping or hacking and are still able to be accessed even if you’re without a connection. However, they pale in comparison to cloud storage when you think about how susceptible they are to physical damage and deterioration over time.

Cloud-to-cloud backups, on the other hand, have the advantage in several different ways. In a worst case scenario, they’re not going to be a cause for concern should you suddenly have to evacuate your home or office — everything’s stored off-site and away from you over the internet, so there’s nothing you need to grab in a rush. This fact even comes in handy in much less serious scenarios, like when you’re in a rush to get out the door in the morning and forget to grab something. Cloud-to-cloud backups are accessible from any device that connects to the internet, so it’s not like you need your own personal device to get into it. They also boast much more intricate forms of encryption, which hard drives might not come equipped with.

The Bottom Line: You Can Never Be Too Safe

On that note, it’s also a good idea to occasionally check in on your backups to make sure that everything truly is backed up and up-to-date. Many people will backup once, then forget to check those backups as the years go on, and then find themselves without years’ worth of vital info. To combat this, you can often enable automatic backups to the cloud — and, in the case of cloud-to-cloud backups, enable automatic backups from one cloud host to the second cloud host.

Looking at both cloud-to-cloud backups and other forms of backups, it’s obvious that the one true storage solution is probably a mix of both online and physical storage. After all, when it comes to your information and your data, you can truly never be too safe or have too many backups. Should you ever end up in a scenario where you need to access your backups, it wouldn’t hurt to have the option to plug in your hard drive or log into your cloud storage host of choice — whatever is the easiest in the moment. What ultimately matters most is that your info is backed up in the first place. Cloud-to-cloud is just one of many reliable ways to do so.