In March 2022, we posted a detailed breakdown of a 2-terabyte (TB) flash drive available on Amazon for about $40. The drive was a scam, as its actual storage capacity was much lower.

While large-capacity flash drives exist, they’re generally expensive. Well-known manufacturers like Kingston offer 1TB USB flash drives for about $180, and those drives are real — but currently, you cannot buy a legitimate 2TB flash drive for less than $100.

16TB SSDs are scams, even if they’re shipped by an otherwise reputable seller.

Review Geek reports that “dozens and dozens” of 16TB SSDs are available on Amazon. Some of the drives are even shipped by Amazon — and many of them cost less than $100.

That’s a little too good to be true. An 8TB hard drive from a reputable manufacturer costs at least $150. What gives?

Simply put, the 16TB SSDs on Amazon aren’t real — most include a generic microSD card attached to a USB card reader. Review Geek opened one of the questionable drives to find a 64GB (that’s gigabytes, not terabytes) microSD card connected to a generic USB reader.

This is a new take on the older USB drive scam. In our own tear-down of a 2TB flash drive, we found only 32GB of storage.

Fake SSDs and USB drives can cause real data loss.

So, what happens if you actually try to use one of these devices? 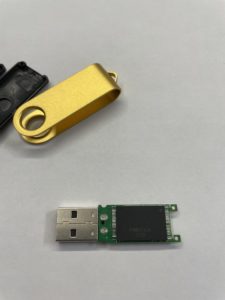 Most operating systems will show the drive with a false capacity. This is possible due to modifications to the small amount of writable space located at the beginning of the flash storage.

However, if the user tries to write a large file — or multiple files exceeding the actual available storage space — the data will disappear. The operating system may not provide any error notifications. That’s because the drive is working as intended (as far as the operating system is concerned).

And while most “manufacturers” offer a warranty, data storage warranties generally don’t cover data loss. It’s likely that the sellers will simply replace the scam drive with another scam drive.

In March 2022, we found “2TB flash drives” on various websites including Walmart and eBay. As of time of publication — nearly a year after our article — both of those websites still sold those products.

But on Walmart, most of the fake USB drives had poor reviews. Amazon’s sellers are craftier (or, at least, more proficient at submitting fake reviews).

If you’re in the market for a new storage device, keep these tips in mind:

If you’ve lost data due to an SSD or hard drive failure, we’re here to help. Datarecovery.com provides free media evaluations, and thanks to our no data, no charge guarantee, you don’t pay if we’re unable to recover your data.