Today, the vast majority of broadcast footage is shot with digital equipment — but that’s a relatively recent development.

For decades, analog formats like Betacam and U-Matic were standard, and even after the introduction of Digital Betacam (DigiBeta), many broadcasters maintained their video archives in legacy analog formats.

Professional broadcasters have archived content on videotapes for more than 70 years. Here’s a quick overview of major innovations.

Yes, that Bing Crosby. The singer was one of the first to recognize the potential of audio recordings, which he used to pre-record his radio shows for later broadcast.

In 1951, his company, Bing Crosby Enterprises (BCE), introduced a video recording device based on a modified quarter-inch Ampex tape recorder. This early technology did not record at a suitable quality for television broadcasts, but it spurred innovation in the industry.

Four years later, Ampex introduced a 2″ black-and-white quadruplex video deck at the 1956 National Association of Broadcasters. The Quadruplex (or Quad) was the first commercial videotape format, utilizing four recording and playback heads at relatively slow speeds. Quadruplex remained a standard until the 1980s, but helical-scan formats eventually made it obsolete.

The Ampex Quadruplex used four heads, which combined the segments of the signal into a single video image (hence the name, Quadruplex). This was an excellent innovation for black-and-white video recording, but as color video became standard, the limitations of the technology became evident. Color distortion was common, and “joints” appeared between the signals recorded by different heads.

In 1954, Dr. Kenichi Sawazaki developed helical scan recording, which uses a single head to write on a diagonal track on a 2-inch tape. Toshiba introduced the first helical scan prototype in 1959, which had a significantly lower manufacturing cost than the Quadruplex. However, the Quadruplex remained a standard for years until helical scan tapes became a less expensive, higher quality recording solution.

While Sony’s U-matic was intended for consumer markets, the ¾-inch format introduced a number of practical features that immediately appealed to broadcasters. Most importantly: Compared with other broadcast-quality formats, it was relatively cheap.

U-matic was also one of the first formats to use a cassette rather than a reel-to-reel design, which made it ideal for field recordings. In the 1980s, Sony introduced Broadcast Video U-Matic (BCU), which allowed for high-band recording.

U-Matic was popular for digital and audio archival work, but another Sony format provided superior editing capabilities at a lower price point.

Related: Can You Transfer U-Matic to Digital Video Formats?

However, Betacam was intended for professionals and provided a much higher quality output than consumer Betamax. One of the major draws: Sony’s Betacam decks, which provided professionals with much more control during the editing process.

Betacam wasn’t a high-quality videocassette format compared to other options at the time, but it was inexpensive (and if you’re reading this timeline closely, you’ll understand that cost is a major factor for broadcasters). 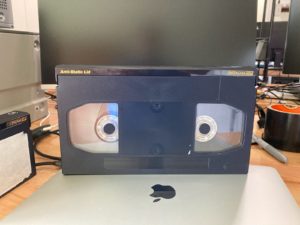 In 1986, Sony introduced Betacam Superior Quality (Betacam SP), which had an improved horizontal resolution of 340 lines. Today, many video archives still use Betacam SP (although as we’ve noted in other articles, analog formats don’t last forever — and if your organization maintains a large quantity of Betacam or Betacam SP tapes, it’s time to upgrade to digital).

Digital video has enormous advantages over analog, but until the early 1990s, it wasn’t a practical option for broadcasters, educators, and other professional applications.

That changed with Digital Betacam. With a recording time of up to 124 minutes, DigiBeta recorded with 10-bit YUV 4:2:2 sampling, which provided excellent color reproduction.

Three years later, Betacam SX, a less expensive version of DigiBeta, hit the market — but the original DigiBeta had become the go-to standard.

By the early 2000s, the market for BetaSP had effectively vanished. While many broadcasters maintained (and continue to maintain) archives of BetaSP, original Betacam, and earlier formats, few were using them for day-to-day recording.

Sony discontinued the BetaSP format in 2001, then announced the depletion of their stock of legacy equipment in 2005.

Digitize Your Broadcast Videos with Datarecovery.com

If your organization needs to digitize an archive of Betacam, U-Matic, Betacam SP, DigiBeta, or other formats, Datarecovery.com can help. With an expansive library of tape decks, video repair laboratories with certified cleanrooms, and industry-leading technology, we provide flexible resources for at-scale video digitization.

For every case, we create a proprietary content management system, enabling professionals to find films based on media type, audio content (through automated transcription), video origin, or other criteria. Learn more about our Digital Content Management System or call us at 1-800-237-4200 for a free quote.