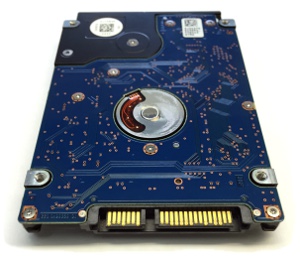 If you’re building a PC or buying an external hard drive, you may have the option to decide whether to orient the drive vertically or horizontally. Horizontal orientation is more or less the de facto standard — chances are, you’re reading this on a computer with horizontally mounted storage media — but some users choose vertical orientation to save space or to achieve a certain aesthetic.

Many of our customers have asked whether vertical orientation increases the chances of hard drive failure, limiting the lifespan of the device. Here’s the answer: Orientation shouldn’t matter. We haven’t performed any long-range studies on this question, but nearly every major hard drive manufacturer has addressed the matter.

So, what if you mount the hard drive upside down or at an angle? Most hard drive manufacturers say that’s okay, provided that the hard drive is secured to its chassis. Modern storage devices are engineered to achieve an operating lifespan of about 3-5 years, and orientation won’t significantly change that lifespan.

There’s one key exception to this rule: If your hard drive is operating, you shouldn’t change its orientation. Hard drives contain actuator heads that read and write data from the platters, which are coated in a thin magnetic material that stores your data. The actuator heads float on a cushion of air. That air pressure is constant regardless of hard drive orientation, but reorienting the hard drive could disrupt the airflow, causing the heads to crash into the platters (a failure scenario commonly referred to as a head crash). This can cause permanent data loss.

Some of our engineers also believe that hard drives shouldn’t be reoriented after operating under certain conditions for extended periods of time. In other words, if your desktop PC’s hard drive has operated in a horizontal orientation for several years, switching to a vertical orientation could increase the chances of failure. This isn’t settled science — and it’s a hotly debated topic in our office — but the safest course of action may be to choose an orientation and stick with it.

The consensus opinion: If orientation does have an effect on hard drive lifespan, it’s not a major effect. Otherwise, manufacturers would declare a preference for a specific orientation in their warranties.

Other operating conditions are far more important. For instance:

These aren’t the only environmental factors that affect hard drive lifespan, but they’re all much more significant than orientation. Put simply: If you’re concerned about premature hard drive failure, consider every other aspect of your operating environment before worrying about mounting the drive vertically or horizontally.

Even under optimal operating conditions, all hard drives eventually fail.

Hard drives are mechanical devices, and mechanical devices wear down over time. No form of storage media lasts forever; solid-state drives (SSDs) are generally less susceptible to their operating conditions, but they have a limited number of read/write cycles. Data tape cartridges can last for decades, but they’re susceptible to high humidity and eventually lose their magnetic properties.

The takeaway: The only way to prevent data loss is to back up important data. We recommend keeping at least three copies of important files including one off-site backup (cloud backup services are an excellent option for home computer users).

If you’re backing up your data regularly, you can afford to spend less time worrying about factors like orientation and humidity. Even under moderately poor operating conditions, most hard drives will hold data for upwards of 3 years without serious issues. Hard drive orientation may not matter much, but great backup practices can certainly give you peace of mind.

Datarecovery.com is a world leader in hard drive data recovery services. If you’ve lost data due to a hard drive failure, fill out our case submission form or call us today at 1-800-237-4200.