Contrary to popular belief, the enclosure of a hard drive does not create a perfect seal (on most hard drives). One look at a flood-damaged hard drive will make that clear — we frequently receive hard drives that have been submerged in water, and the first step of our process is to clean the data storage platters and other components.

Standard hard drives aren’t airtight, and creating that type of seal might cause significant issues for some models. Air plays an important role in hard drive operation. As the platters spin, the read/write heads float on a cushion of air just above the surface of the moving disks. The rotation of the platters creates this cushion; without air, the read/write heads would crash down onto the platters, damaging the magnetic material that stores your data. The circulation of air also plays a minor role in heat dissipation. 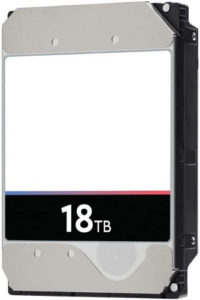 This drive is helium-filled and airtight

At the enterprise level, and with some highest-capacity consumer models, some drives actually are vacuum sealed — these drives use helium to create the necessary space between the read/write heads and platters. This allows for hard drives with a higher capacity, lower operating noise, and lower power requirements. The helium gas limits the chances of read/write head crashes, and since the drives are sealed, there’s little to no chance of media contamination.

However, there’s one problem: Helium isn’t cheap. Helium hard drives are currently much more expensive than standard hard drives, and most consumers will see greater performance improvements by opting for a solid-state drive (SSD), since SSDs don’t use moving components to store data.

While hard drives aren’t pressure sealed, they are engineered to control the air that travels through the drive. Filters regulate pressure and prevent particles from traveling into (or out of) the enclosure.

Modern hard drives store a tremendous amount of data on their platters, and a single hair follicle or piece of dust can prevent the drive from operating normally. By displacing the read/write heads, a contaminant could cause severe media damage. The filters prevent this from occurring.

Most drives have two filters:

When a hard drive has sustained severe damage, the recirculating filter can turn grey or silver — and that’s never a good sign for our data recovery engineers. That’s why we recommend disconnecting a hard drive as soon as it stops functioning normally. Operating the drive in a failed state can prevent a successful data recovery.

Hard drive filters are installed at the factory and remain within the enclosure through the entire operating life of the device. They are not user-replaceable (though some earlier hard drives had replaceable filters).

Opening a Hard Drive Can Cause Permanent Damage

Hard drives aren’t airtight, but they’re still sealed. They’re engineered to prevent contamination. A contaminant doesn’t need to be large to create issues — the read/write heads float about 6 microns from the platters, so a nearly microscopic contaminant could cause a head crash.

Opening a hard drive can create serious issues, even in a fairly clean environment. Datarecovery.com engineers work in Class 4 cleanrooms, which are controlled environments suitable for data recovery attempts. Never open a hard drive outside of a certified clean, particle-free environment — your data depends on it.